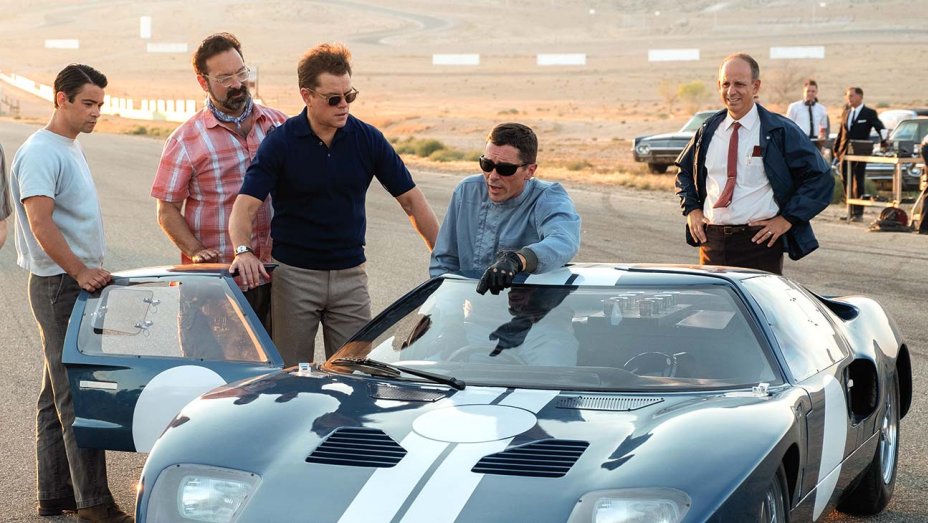 I’m not sure Ford vs. Ferrari is the appropriate title for this film. Shelby vs. Ford, Miles vs. Beebe, or The Ken Miles Story might have more aptly described the content. Ferrari plays just a small part in the overall plot. The good news is this is a very entertaining film, well acted by Matt Damon and Christian Bale. It features some decent racing sequences of LeMans, including some shots at night. I found those especially good.

The first two thirds of the film focuses on Henry Ford II’s plan to pull his company out of its sales slump. In the early sixties, sales had dropped as the baby boomers sought sleeker, faster cars. He decides on the quick fix of buying financially strapped Ferrari. On the verge of the sale, Enzo Ferrari rejects the offer because  he would lose of the control of the racing program. Ferrari then accepts an offer from Fiat for the same price.

Ford soon introduces the Mustang under Lee Iacocca’s direction and plans to build a LeMans car to beat Ferrari. They reach an agreement with Carroll Shelby to build what became the Ford GT40.  Shelby and his friend and test driver Ken Miles don’t exactly see eye to eye with the Ford executives. Miles and Leo Beebe in particular don’t care for each other. Shelby and Miles are abrasive characters who have issues following the company line.  However, when they win the 1966 24 Hours of Daytona and the 12 Hours of Sebring, Ford grudgingly gives them some respect.

After Ford’s disastrous showing in the 1965 24 Hours of LeMans, Shelby’s team continues to develop the car with the aid of a larger 427 engine. Miles, who was not allowed to drive in the 1965 race, starts the 1966 event and charges from a lap down at the start to a commanding lead. The controversial finish of that year’s race, dictated by Leo Beebe, is still contentious.

If you go expecting lots of racing, you will be disappointed. Almost all the racing footage takes place in the last third of the movie. I was expecting more racing. There are lots of shots of the speedometer(?) and the tachometer hitting 7,000 rpm. And of course some crash scenes, a few of which seemed gratuitous.

A subplot involves Miles, his supportive wife, and his son Peter, who adores his father. Theses scenes help round out Miles’ character and give him a sympathetic touch. Shelby races vicariously through Miles after Shelby’s career was cut short by a heart condition.

As a film Ford vs Ferrari is entertaining. I liked the depictions of the characters, especially since last week I read Go Like Hell. I found their screen portrayal true to the book. I was a bit disappointed that most of the other stars of the era were not depicted, even in a cameo. Several were mentioned, but not portrayed.

If you want to see a racing movie with lots of racing, I recommend Rush or Grand Prix. I recommend Ford vs Ferrari as a study of the era when the business model of racing began to change as Ferrari’s dominance begins to fade from the sports car scene.

From the Editor: If you’d like to read this story on Mike Silver’s own site The Pit Window, click here:  https://thepitwindow.blog/2019/11/15/movie-review-ford-vs-ferrari/