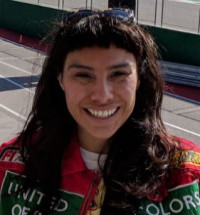 Mandy Curi grew up in Houston Texas. She attended film school at the University of Texas at Austin where she received a degree in Radio, Television, and Film. After graduating from the University of Texas, she moved to New York City where she made her mark in the Television industry as a casting assistant and producer. Mandy has worked on and produced shows for MTV, Discovery Channel, The Animal Planet, and TLC. She grew up watching F1 and going to Indycar races with her dad. After her dad passed away in 2018 she decided to honor him and live out her passion for Motorsports. She now lives in Austin Texas and regularly contributes and co-hosts the RaceFanHeaven Show and The MZone Show with Ric & Chuck.