It’s GREAT To Be Back! 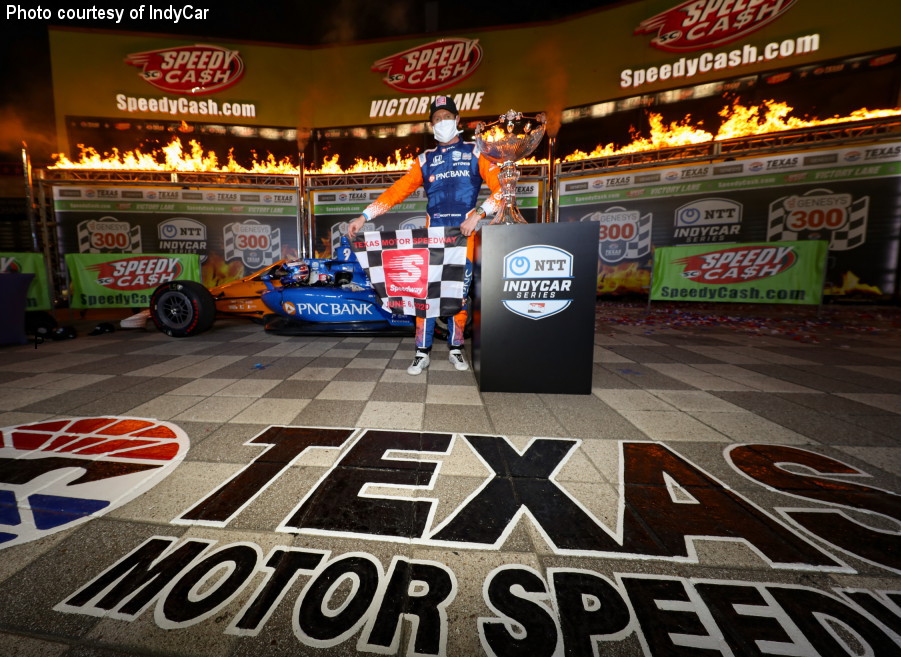 Well it’s the morning after the first race back for IndyCar, after the most unusual “off season” since World War 2. And I just want to say it’s great to be back!

Texas Motor Speedway hosted the IndyCar season opener, the first live sporting event in Texas since the start of this pandemic 4 months ago, albeit without fans in the stands, but it sure was wonderful to see race cars back on track.

Because of the continuing viral situation, IndyCar limited the action to a one-day show with most of the competitors and crews flying in to Texas on the morning of the race and returning home immediately after its conclusion. It made for a long day but was prudent in light of the risks involved.

One challenge that reared its head even before practice began was the race track itself. In the 2019 season Texas Motor Speedway had applied a traction compound on the turns of the track in an attempt to improve passing for the NASCAR series which visits there twice a season. For whatever reason (there are a lot of theories) the area where the compound was applied had MUCH less grip than the rest of the racing surface. In the one and only practice session the drivers discovered this very quickly.

Since the traction compound was on the outside lanes of the turns the fast way around was the low line exclusively. Some experimented a bit but they mostly stayed low where the grip was. This did not bode well for a return of the great side by side racing that Texas has been known for in the past.

The practice did have some drama as Rinus Veekay tried a very low line resulting in a spin and trip to the wall. Ryan Hunter-Reay brushed the outside wall and did some damage. Ed Carpenter also spun in the session but didn’t hit anything.

In qualifying the usual cream came to the top as 2019 champ Josef Newgarden took pole and Scott Dixon was 2nd fastest. Some notables in the top 10 were Zach Veach in 5th and Graham Rahal in 7th. Tony Kanaan, starting his “Last Lap” semi-retirement tour, grabbed the 10th place starting spot.

Some drama did occur as Takuma Sato had a big wreck on his warm up lap when he inexplicably went high into that nasty traction compound and stuffed his car in the wall so hard that the team had no time to fix it and they had to withdraw from starting the race.

As if the lack of a live crowd wasn’t weird enough to start the race, there were a number of cars with issues before the grid even left pit road. Rossi, Hunter-Reay and Rahal all had problems that were fixable but garnered them all penalties of one kind or another and effectively ruined their races before the green flag even waved. I don’t recall seeing this many grid issues ever, but maybe it was due to the long layoff. Everyone was a bit rusty after being quarantined for so long.

The race itself was a bit of a snoozer, as the predictions of very little passing came true. At the start Newgarden and Dixon set sail and dominated. The rest of the field was mostly single file and spread out as the field settled in and tried to find speed and passing opportunities.

Newgarden lead early but complained of a vibration and pitted a bit early. After the first round of stops, Dixon put a power move on JoNew and never looked back. His was clearly the best car all night and he cruised to a season opening victory.

While the Texas track did not create as much action as past races, there was some. Felix Rosenqvist started 9th and steadily moved up during the first half of the race and in the second half made it up to second place behind teammate Dixon. With only 13 laps to go the leaders all had to pit and when they cycled back out they were caught in traffic, and things got dicey.

Rosenqvist was pushing hard as he thought he had something for the “Ice Man” Dixon if he could catch him, and made a somewhat ill-advised move to pass a slower Hinchcliffe on the outside, got caught in that “traction” compound, and spun up into the wall. I loved the “go for it” attitude there. Later he Tweeted “Lost an easy top 2 today. Can always discuss whose fault, this & that – I’m behind the wheel so I’ll own up to it.”

All in all it was just great to have our favorite drivers back on track and racing for the win. Just getting restarted after the challenges we all have faced in these last 4 months is a big win for IndyCar in my book.

I don’t know about you, but the return to racing after this crazy time in our history made me realize just how badly I have missed enjoying and reporting on my favorite sport.

I hope you all have renewed excitement and passion as well and we all just can’t WAIT to get to the Indy road course on the 4th of July weekend!